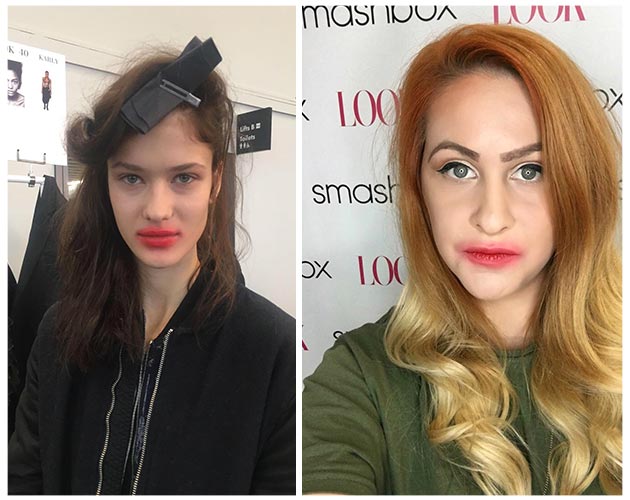 Here's what happened when we recreated one of LFW's boldest beauty trends, and asked you for YOUR verdict...

You might have seen that there’s something of a lipstick phenomenon going on right now, and it’s going by the name of #SnogLips.

Born from the London Fashion Week catwalk, the smeared-lippy trend seems to have captured the imagination of the internet. And, basically, it’s all to do with emulating a post-kiss look.

Spotted backstage at Preen by Thornton Bregazzi, make-up guru Val Garland described the desired effect as a romantic snog-off, with the models looking like they’d been kissing for hours.

Using MAC’s True Red lipstick in the centre of the lips, the colour was then blended outwards using a buffing brush. Oo-er.

In our opinion, a look as creative and bold as this deserves to see the light of day.  We could hardly wait to recreate some #SnogLips of our very own IRL (*disclaimer: no actual snogging occurred) and, what’s more, we took them onto the streets of London to get YOUR verdict.

It’s safe to say that it was a ‘no’ from most, but the reactions are pretty interesting all the same.

Would you give Snog Lips a go?